So, I got my hetero ass out of Starbucks, did my morning errands, and headed on home. On the way home I spotted Pinky at the bus stop, listening to his iPod and wagging his ass to the music. He kept looking up and down the street…like a hooker looking for a John.

Later in the day I had to go back to the shopping center (where Starbucks is located) and drop some things off at the dry cleaners. It was hot, and I was thirsty, so I thought I'd drop by Starbucks and get one of those blended fruit and tea drinks.

I ordered my drink, sat in the same chair I used that morning, and started browsing through one of the new books I'd just purchased (Einstein: His Life and Universe...in case anyone's interested).

I was enjoying the first couple of chapters (and enjoying even more the scanti-clad thirty-something mom's who were stopping by on their way home from the pool)…when…guess what…yep, here comes Pinky, slinking up to the cash register. Thank God there wasn't a line or he might have wiggled his butt in front of me again.

Having said that, I'm very liberal when it comes to one's sexual preferences, and I'm certainly not a homophobic guy. But, I hope to hell he isn't going to be a new fixture in the neighborhood. Hopefully, his trolling for c__k su__ers will fail and he'll move on.

I did notice that most of the young moms were holding their kids a little closer to themselves and giving Pinky a wide berth. Quite a few of the kids were bug-eyed and couldn't stop staring and pointing at Pinky. I wonder how mommy replied to their questions.

Posted by Badabing at 4:13 PM 4 comments: Links to this post

This is coming to you live…well almost live...from my local Starbucks. I say 'almost' because it's taking me more time to write about the scene than it took for the scene to happen in the first place.

I'm sitting in Starbucks as I write this...having my usual double espresso, reading my favorite blogs, and leering discreetly glancing at the pretty women...when...out of the corner of my eye...I glimpse an ass dressed in a pink mini-mini skirt wiggling about two feet away from me. Yes, wiggling. Wiggling like in "Hey sailor, lookin' for a good time?" kind of wiggling. Wiggling like when hookers wiggle their ass on the street corner…that kind of wiggling.

What can I say, I have to stop and look, right? I mean I have no choice anyway since it's a reflex reaction, right?

It's a pink mini-mini skirt all right, and it barely covers the butt cheeks. My eyes float upward…a white sports bra top, about two sizes too small. My eyes drift downward…pink flip flops decorated with fluffy pink flowers. The toes were painted…you guessed it…pink. The oversized purse was slung over a shoulder and was, of course, also pink. And did I mention the pink headband.

And the wiggling ass…well, it was still wiggling, and now only about a foot from where I'm sitting.

Now that I've got you all hot and bothered you're probably wondering about the rest of the body, right?

Okay, let's start with the legs and work our way up. The legs are long and slender with just a hint of muscular definition.

Have you guessed it yet?

Let me get you off the hook.

This is true...every pinkin' word of it. Now I'm gettin' the hell out of here before he thinks I'm interested.


Badaboom Badabing...
Posted by Badabing at 10:36 AM 3 comments: Links to this post 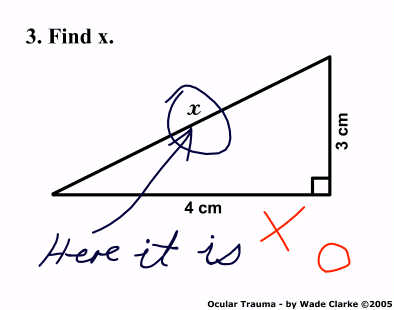 American students are falling behind many European and Asian countries in math and the sciences. With test answers like this is it any wonder??

Or maybe the question was just ambiquous? Not!
Posted by Badabing at 5:17 PM 2 comments: Links to this post

Talk Talk Talk...Can There Be Too Much of It??

A few weeks ago I wrote a note to myself questioning whether I use too much dialog in my writing. Now I'm not referring to what I write in my blog. I'm referring to a novel that I have been stutter-starting on for the last few years and that I have promised myself I would finish by the end of June. Well…at least the first draft.

I like dialog and find it easy to write…I really like to write dialog. The majority of many of my scenes are heavy with dialog. Personally, I find the dialog easy to read…but, I may be prejudiced because I'm the one who wrote them. Ya' think? Anyway, I never realized I used so much dialog, and wondered if that is bad style.

I just finished reading James Patterson's newest novel, The 6th Target, and I noticed he uses a combination of styles. Some of his chapters have no dialog, some have one to three sentences of dialog, and some are virtually all dialog. He really mixes it up, and since most of his chapters are three pages or less his stories just zip right along.

On the other hand, I just started reading Elmore Leonard's new book, Up In Honey's Room, and he has a completely different style. After reading the first few chapters, I noticed that they were almost pure dialog. I spot checked random chapters later in the book and those chapters appear to be almost 100% dialog too. Chapter after chapter after chapter...

I'll have to double check, but I think I read somewhere in one of those "how to" books that Leonard is supposed to be a master of dialog. Personally, I found his dialog hard to read. It could have just been me…it was late at night and I was tired…or maybe not. I guess I should re-read and see if I have the same reaction…

Okay, I did just that. I re-read some chapters and made a decision…I'm shit-canning his book. That's a technical term meaning I'm not going to read it…which is something I very rarely choose to do.

I did the same thing for my novel. I went back and re-read a dozen scenes, and I think there is a good mix of narration and dialog. Yes, several scenes are almost pure dialog but they seem to work, IMHO.

So I guess I'll keep plugging along…June is just around the corner.


Badaboom Badabing...
Posted by Badabing at 10:52 AM 2 comments: Links to this post

Business Was Picking Up...

Last week kenju made a post about her favorite job when she was growing up. It brought back memories of my summer jobs and I got to thinking about which one was my favorite.

And the winner is…garbage man.

I kid you not. When I was in college I worked as a garbage man one summer. That job was head and shoulders the best job ever…for a summer job anyway.

So, how come it was such a great job, you ask? Well, first, there was the money. I can't remember exactly how much it paid, but it was about $80 per week…that was good money for a college kid in the 60's.

There were also some interesting perks. If you were lucky enough to get on a route that included business establishments...restaurants, bakeries, bars, for example... you got freebies every time you picked up. I ate a lot of free breakfasts and lunches, brought home dozens of pastries, and, yes, drank a considerable amount of beer.

You couldn't beat the hours. We started at 7:30am, but you were done after making two trips to the dumps. On a slow day, if we got partnered up with an old fart, we were done no later than 3:00. Many of the drivers lobbied to get two college kids assigned to their trucks. We'd run between houses instead of walk, and would toss cans back and forth between us instead of carrying them to the truck. It was quite a beautiful thing to see (you have to let your imagination go here)...full garbage cans launched into a perfect parabolic arc from the kid at curbside to his waiting partner, who, in one fluid motion, would dump its contents into the truck and send the empty can flying back. Without spilling anything on the street. There were dual benefits to this: First, it was great exercise. Second, and most important, we'd usually finish our second trip to the dumps by noon, and then hit the beach for the rest of the day.

To be fair, there were also a few downsides as well.

The job was absolutely mindless. After a few weeks of working the trucks your mind went to mush, and even reading the newspaper (and I'm talking the Daily News here, not the New York Times) became a challenge.

And then there was the vocabulary. The regulars who worked on the trucks had a vocabulary that was pretty much limited to four letter words…and we absorbed them through the process of verbal osmosis (okay, okay, I'm back to making words up again.) One of the kids was the son of a devout minister. He came in one day telling us that at dinner the night before he said "Mom, can you pass the fuckin' potatoes, please?" He didn't even realize what he had said until his parents recovered from the shock and filled him in.

Oh yeah, and the nicknames some of the regulars had...Sitting Bull, Nobby, Eight Ball….

Badaboom Badabing...
Posted by Badabing at 9:45 AM 2 comments: Links to this post

Who's Got The Biggest One? 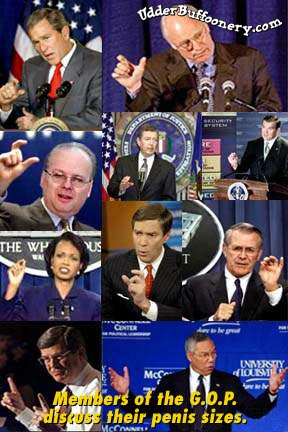 There are big fish stories, and there are ...


Badaboom Badabing...
Posted by Badabing at 10:16 AM 2 comments: Links to this post

"Just how big was it Madame Secretary?" 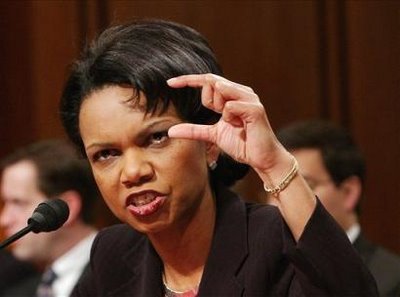 Posted by Badabing at 4:46 PM 3 comments: Links to this post

Quote of the Day

I ran across this quote and just couldn't resist posting it.

"I find television very educating. Every time somebody turns on the set, I go into the other room and read a book." - Groucho Marx
Posted by Badabing at 11:24 AM 1 comment: Links to this post