Where In The World Is Badabing?

Yes, that's right...I am in Barcelona...that would be the Barcelona in Spain. The wife and I are celebrating our 30th wedding anniversary here. So far, the weather is perfect and the food is great. I will be posting over the next few days and hope to have some interesting stories to share.

And just in case you're wondering "has he been hanging out at the bars?" ... abso-friggin-lutely.

Posted by Badabing at 4:19 AM 3 comments: Links to this post

A Little Trick I Learned

For someone who teaches graduate level computer science courses I am sometimes a friggin' stunad when it comes to my own computers. For those who don't know what a stunad is...let me refer you to my N'Italian Lessons 101 link.

Anyway, last week I felt like I was walking around with a big "Kick Me...I'm a Stunad" sign on my back. Let me start from the beginning.

I didn't bring the power adapter with me so I wolfed down the coffee and raced home.

I plugged in the adapter and powered up.

I could really relate to this song...

I could hear my heart thumping and feel the old blood pressure spike up a good forty points. I know what you're thinking...Did he backup his data?

Well, I actually did, but it was from several weeks prior.

I took a deep breath and tried to calm down. I figured my hard drive was fried...this has happened before, so I knew that the good news was there'd be a chance I could recover some data.

So, what was I in jeopardy of losing? Email (the important ones were replaceable), client notes (not that big a deal since I finished the project), and eight chapters of my novel (irreplaceable).

After kicking myself in the ass for fifteen minutes, and vowing to religously do a weekly backup (was it by chance that my eye caught that external disk drive on sale at Circuit City the weekend before?), I called Computer Geeks and scheduled a house call, then went on to my dentist appointment.

I was really worried that I wouldn't be able to re-write the lost novel chapters and make them as good as the originals. Shit, shit, and triple shit. So I whined and bitched and moaned, beat up on myself a little more, threatened to shitcan the whole novel project (even though I've only got a dozen chapters to go), and watched my face turn red in the rear view mirror.

I got to the dentist's office, sat in the chair, and he asked if there had been any changes to my health, medications...yada yada yada...since he last saw me two weeks prior. He said he's only asking because I look a little stressed and my face was red.

I shared the events of the morning with him, he nodded compassionately, and started working on me. He proceeded to tell me that he'd had a similar experience with his office computer. He was able to restore his data, but had to match up 5,000 mouth pictures to patient records manually. Suddenly, I didn't feel so bad.

As I was scheduling another appointment with the receptionist, he came out and asked if my computer was a laptop. He then told me to try taking the battery out and putting it back in...already did that. He then suggested I try removing the battery and attempt to power up using just the power adapter...that had worked for a friend of his, but he didn't know why.

Bingo...all of a sudden five years of engineering school bubbled up to my conscious memory...the design of the computer was such that the battery would be recharged when the power adapter was plugged in. In order for the battery to charge, current had to flow through it. So...a bad battery might short the circuit...yada, yada, yada.

I rushed home, took the battery out, plugged in the adapter, pushed the power button, and....the little sucker booted up just fine. Whew!!!

I should've thought of that current thing right off the bat...so the joy of not losing my data was quickly replaced with my feeling like a stunad...for about five seconds anyway :-)

So...there's a little trick you can try if your laptop happens to crap out on you.

And, yes, I now have my novel backed up onto three separate computers and a CD-ROM.


My Home Page
Posted by Badabing at 11:23 AM 4 comments: Links to this post

Email ThisBlogThis!Share to TwitterShare to FacebookShare to Pinterest
Labels: laptop computers, stunad, stupid is as stupid does

And The Fishin' Was Good 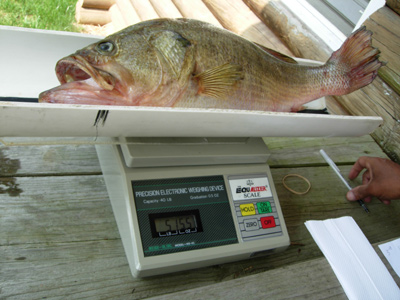 I really haven't been fishing since my last post, but my son has. He caught this largemouth bass in Southern Maryland last week...Just a half ounce under six pounds.

Mr. Fish has since been filleted and frozen and will be consumed shortly.

Damn...why can't I catch one that big?
Posted by Badabing at 11:14 AM No comments: Links to this post