We Called Her Mellow Yellow

On my trip to Atlanta last week, I was looking out the window at a river that ran by my client's office. Somebody told me it was the Chattahoochee River. The name seemed to ring a bell somewhere in my mind, and on the plane ride back it came to me...I thought it was the river where they shot the movie Deliverance (with Burt Reynolds and John Voight) back around 1970. For some reason it triggered a memory from my youth. As it turns out, I checked, and the river where the film was shot was the Chatooga, but who gives a rat's ass...it gave me the idea for this post.

I went through some old photo albums and dug out the pictures posted here. Back in the 1960's a few of my buddies and I pooled our meager funds and purchased a life raft that we named Mellow Yellow (after the Beatles Song). Every Spring, for several years, we would take a roadtrip from our neighborhood just outside of New York City to the Delaware Water Gap in Pennsylvania...city boys in the country. We'd park one car up river and another car several miles down river. Then we'd launch Mellow Yellow and run the rapids down the Delaware River. It would take us a few hours to do the run, then we'd break out sandwiches and beer and talk about how hot-shit lucky we were to conquer those monster rapids. Truthfully, they were more like mouse rapids though we did have a few close calls. In any case, it made for good bar braggin' for the weekend (big fish stories couldn't hold a candle to ours)...and I vividly recall that there was a definite non-linear relationship between the number of beers consumed and the treachery of the rapids. 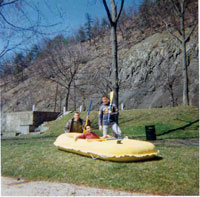 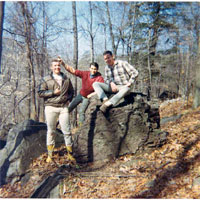 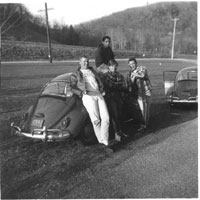 So here's a few pictures of my buds and Mellow Yellow. The big blond guy (he was 6-foot-4 and 240 pounds at 15 years old...bigger when photo was taken) is Eddy (aka Big Bear). The dark skinny guy is Denny (sadly, Leukemia took him at 25 years of age), and the other big guy with curly hair is Jimmy. I was the designated photographer (wielding my Kodak Instamatic) for the color pics. In the black & white pic, that's me in the plaid shirt and long hair looking like a midget standing between Jimmy and Bear.

One of the VW's belonged to Jimmy, the other to Bear. I can't tell which one we were posing in from the picture, but they were identical cars except for the color...I remember that Jimmy's was green and Bear's was blue. I've actually been in touch with Jimmy over the last two years, and sent him these pics this past Xmas. We both confirmed that neither of us was in possession of Mellow Yellow, and we know that Denny didn't have her when he left us, which leaves the possibility that Bear may still have her...I saw him 20 years ago but forgot to ask him. I'm gonna' try to track him down and find out.

Oh yeah...in case anyone is wondering...no, we didn't meet with the same fate as the characters in that movie :-)

Well, thanks be to whomever for that!! It looks like a great time was had by all, though. My old gang in high school did some similar stuff; only it was an airplane innertube on a smallish river. Good times.

Ah, the memories! Mine were mainly of fishing trips with buds (buddies, not budweisers) at a slightly younger age. But I have no photos!

But Badabing... You were a great-looking kid! Not trouble getting dates back then, I'll bet.

Your comment about not having trouble getting dates dredged up another memory of back then. When I was in high school someone nominated me as Class Lover. I thought it was kind of a joke (and was actually a little embarassed), but it turned out I was winning, so my competitor actually campaigned for himself...and won. I had to settle for next best Class Lover.

Anyway...now I have trouble even getting a date from my wife ;-)

...and you expect me to believe you all fit into those little Bug-wagons??? heh heh...

My first car was a VW Bug -- Sahara tan. Learned to drive a stick with her. And when the back seat floorboard rusted out, we covered the hole with a telephone book til we could lay in a tray with epoxy filler.