Okay, okay, so I'm two days late. I had a senior moment and forgot.

Anyway...a while ago, I did a post about the evidence that has come to light regarding global warming. Today, in honor of Earth Day, I shall post one of the primary reasons behind the global warming crisis…and it will surprise you I'm sure.

When most people think about global warming, they think of carbon dioxide as a key driver of the crisis. Scientists have recently discovered, however, that the new threat is really methane gas, which is 25 times more potent than carbon monoxide in contributing to the global warming effect.

And, believe it or not…cows are the culprets. Yes, cows. As in Mollie Mollie Moo Cow. More specifically, cow burps and cow farts. I shit you not. 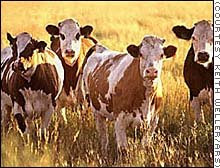 In fact, in Australia alone, cow farts and cow belches account for 90 percent of methane emissions in the agricultural sector.

Let me start with cow burps. At first thought it's hard to imagine this being harmful...but, I have done the research and what I have found is not pretty.

Scientists have estimated that your average cow burps up 140 liters of methane gas daily…that's about 140 2-liter soda bottles worth. Unfortunately, burped methane is difficult to contain, with the result that about six million metric tons of it float blissfully up into the atmosphere each year. And that's just from cows in the United States. To make matters worse, the world cow population has doubled in size over the last 40 years, to more than 1 billion polluting bovines.

Unfortunately, the possibilities for mitigating the effects of cow burps are not good. See, it's really hard to capture burped up methane.

One group of scientists have proposed a sort of one-way pacifier device. Inserted in the cows tracheal tube, it would allow food to pass in but not allow anything to pass out. While early tests showed encouraging results, all involved agreed it would be quite expensive to fit the world's 1 billion cows with such a device.

The real kicker, though, came from PETA, which claimed that this action would be abusive to the bovine community and also result in suppressing the traditional moo sound made by cows…thereby depriving them of their ancestral right to burp.

Bovine Beano has also been proposed a possible solution, but an effective formula has thus far eluded scientists.

So, at least for the time being, it seems we will just have to live with cow burp pollutants.

Now, when it comes to dealing with cow farts, the future is much less bleak...because I have designed a solution to the problem.

And...I've already talked to my patent attorney about it. So watch out Warren Buffet…my name's gonna' be right up there next to yours on the world's richest men list real soon.

Because I'm such a nice guy, I will share my idea with you. Very simply, it's for a fart lighting machine. Specifically, and this name was recommended by my patent attorney, we are calling it "A Methane-Sensitive Rectal-Mounted Bovine Incendiary Catalyst System." We are thinking about dropping the 'bovine' modifier so that the patent will be adaptable to any rectal-mounted fart igniting device, but the first application will be directed specifically to cows.

The idea is quite ingenious if I say so myself. We start with a sleeve-like device that slides over the cow's tail and protects it from flashburn. At one end of the device, near the anus, is a little gizmo that constantly senses for methane. When methane is expelled...badaboom badabing...the device simply lights the fart...eliminating the methane contaminant. An optional accessory would be an attachable fire-resistant shield that could be mounted on the rectal end of the sleeve and would help protect the cow's ass from flashburn caused by the ignition. My attorney believes that as long as cows are allowed to continue to fart and we protect them from burns, the PETA folks should be satisfied.

So, this is my good deed in honor of Earth Day. I'm just hoping we can push it through the Patent Office before it's too late.

While the cow situation is serious enough, when you factor in the impact of human farts (fortunately, there is no methane gas in human burps) on global warming the future is quite dismal. It is true that cows emit more methane gas per unit fart than humans do. But, scientists have calculated that because humans greatly outnumber cows, and fart at least four to six times more per day, the human contribution to methane gas volume in the atmosphere is approximately the same as that for our bovine friends.

I am calling on everyone out there to pitch in and do something to save the earth. What, you ask? What can I do to help? I've got two simple things everyone can do.

One thing is to use Beano on a regular basis. That would certainly help if you are prone to fart after consuming complex carbohydrates. If you combine this with investing in the company that manufactures Beano...before the government mandates the inclusion of Beano in the American diet...you could also retire with a nice nest egg.

Another simple thing you can do is to be a good citizen and light your farts. Yes...light your farts...on a regular basis. In light of the evidence presented it is your patriotic duty. You could also hold fart parties. Let's do our share to get rid of methane gas!

To get you started here are some helpful tips when it comes to lighting farts: 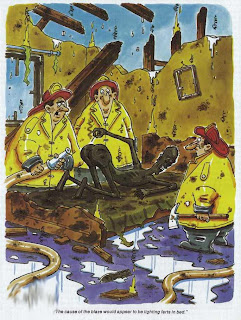 Just be sure to practice safe fart lighting so that you won't end up like the guy in the cartoon.

Well, that's it for today. I've got to go eat some cabbage and beans and then do my part for the environment.

Okay, okay...I couldn't think of a better title than that. Plus, it's Monday morning and I've only had one espresso.

Anyway, the Badabings did a dance thingy weekend before last. This time we didn't dance together, but chose to dance with instructors. Here's a clip of me doing a fox trot with my teacher. 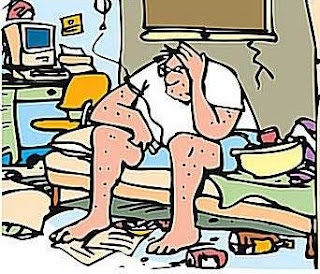 I can't believe I didn't make a single posting in March…either here or on any other blogs. There's a reason. I look like the guy in the cartoon. Well, not really…it's more like I feel like he looks.

Anyway, the reason is I've been working at finishing my novel, and I decided to eliminate as many distractions as possible. I didn't even do any reading, which is a first for me.

So, I finished weekend before last…and got to type 'THE END'…on the first draft…94 scenes, 70,000 words...and many lessons-learned.

I started this project at least four years ago. It is the first attempt in my adult life to do something creative instead of technical or business-related. When I started, getting it published wasn't the real objective…I just wanted to see if I could write the damn thing. I'm still not sure if I'll try to get it published…we'll see how the re-writes turn out.

Oh yes, the re-writes…from what I've read that's where the real work starts. Hemingway used to say that "the first draft is excrement." I'm hoping mine isn't all that stinky.

My Home Page
Posted by Badabing at 9:23 AM 7 comments: