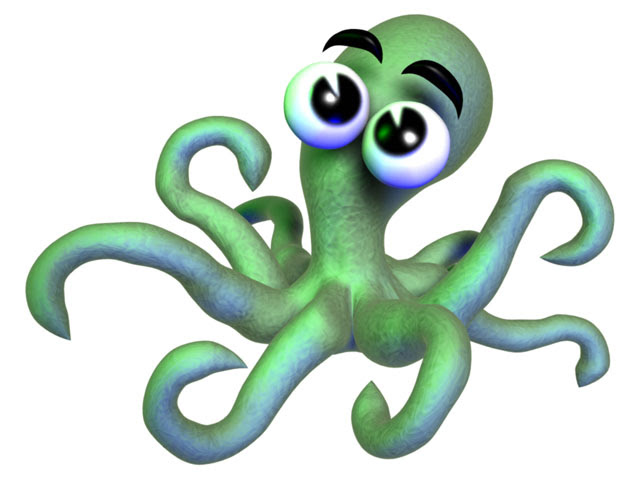 Well, my travels over the last few weeks have been rather uneventful...this little tidbit is about the most exciting thing that happened.

Two weeks ago I was in a suburb of Chicago. When I'm in this particular area I like to go to a restaurant called Tuscany where they serve one of my very favorite dishes...grilled octopus.

As usual I sat at the bar. It was fairly empty, only about five people were there in total. I ordered a glass of wine, and when the bartender served it I ordered my dish...in Italian. In case you're wondering, polpo is the Italian word for octopus. It's pronounced pretty much the way it looks, but the 'pol' part sounds more like 'pole.'

The two women sitting to my right looked at me a little strangely. One of them asked me, in a very raspy voice, "What's that? It sounds really weird."

I was tempted to tell her "poo poo" but, with great discipline, managed to resist. Instead, I just said "polpo" in my best Italian accent.

"What's that?" the other one asked.

"It's very delicious. Very hard to find in many restaurants," was my answer.

"But, what is it?" the first one rasped again.

"I'm going to make you guess...after you see it," I replied with a smile.

Now, at this restaurant they give you the option of having the octopus served whole or cut up. I usually have them cut it up for me...so...as the bartender approached, dish in hand, I made a cutting motion with my air knife. He nodded, looked for a knife, and began cutting my octopus into bitesized pieces.

That particular octopus was particularly tough, because it looked like the bartender was sawing wood. This caught the attention of the two women who again asked what the dish was. I repeated that they would have to guess, then, watching the bartender still working away, added "If he breaks into a sweat or takes out a chain saw, I'm going to send it back and have them cook another one."

This restaurant serves the octopus as a salad, drizzled with a little balsamic vinegar and olive oil, some field greens and a fresh lemon on the side. When it's cut up into little pieces it's hard to tell what's really in the dish...unless you know in advance.

The bartender ultimately served me and the two women peered over at my dish. With dramatic flair I took a forkful and made a satisfying "Hmmmm...good" sound as I looked towards the women.

"What is it?" one of them inquired once again.

"No idea," the raspy one said.

"I know it's not chicken," the other one astutely observed.

They went from curious to horrified in a heartbeat.

"Ewwwwwww," they said in unison, looking like they were about to upchuck their last meal.

For a brief moment I considered betting them a round of drinks if I could guess their next question, which I thought would be "What does it taste like?"

However, as I took a second mouthful and made more yum yum sounds, the expressions on their faces were saying "How on earth can you eat that stuff?" so I decided against the wager.

Instead, I just replied "And, no...it doesn't taste like chicken."

Oh yeah...they left shortly after I took my third bite?

Now, just in case you're wondering what octopus looks like when it's cooked, here ya' go... 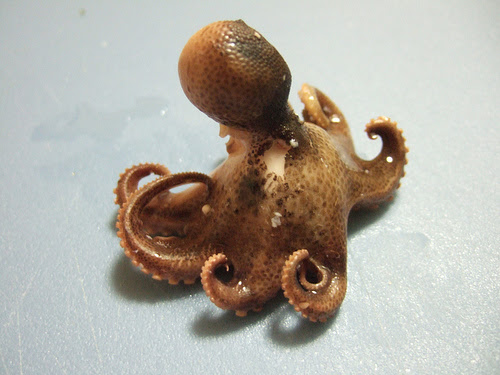 It looks so... spidery. My jaw is sore just wondering how chewy it is.

I was at a buffet once where they had a squid grill. You could have your fresh squid cooked to order. It was a tourist hotel in China. For natives, raw is better, and its a treat to get it fresh enough to still move on the plate.

I passed. I have no idea how squid and octopus compare in taste, because I just don't care for any seafood at all.

Whatever rocks your boat.

It turned out not to be as chewy as I was afraid it would be...I think maybe the bartender had a dull knife. But the charcoal flavor from the grilling combined with the oil and vinegar made up for the chewiness.

I actually ate in the same restaurant again last week and the octopus was perfect this time.

For those of you that are wondering...it does not taste fishy at all...kind of like squid but with a different texture.

I, for one, prefer the one about the chicken and the egg.

Oh! You mean this wasn't a joke?

Hoss sent me your way!

i love octopus and squid as well. theres this great chinese place nearby that does octopus in a stir fry. its awesome.

i have met my share of food freaks though, my mother in law being one.. i always order that when she goes to lunch with us just to watch her gag :)

No, it doesn't look like starfish! And I couldn't eat it.

Being married to an Italian, I have been introduced to squid, octopus, eel, mussels, etc. Let's just say that the first impression wasn't good. A hillbilly used to biscuits and gravy never did acquire a taste for the above mentioned food stuff and that also includes shrimp, clam and lobsters. Good seafood for me? Fried scallops and fried haddock and of course - Fish Sticks.