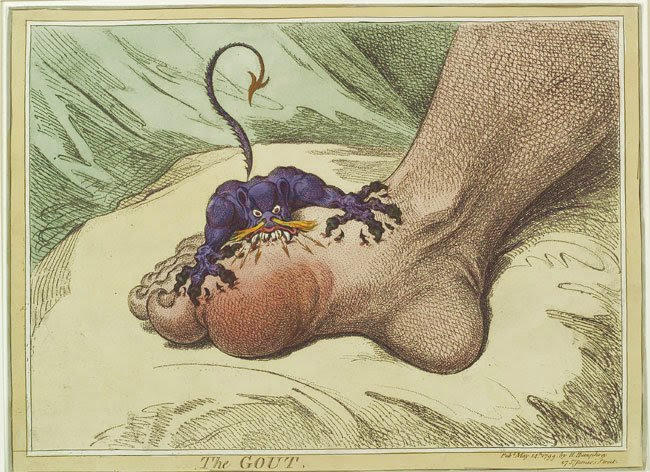 If anyone happened to see a fifty-something guy gimpin' and limpin' through O'Hare like a ninety-something old man last week...that would have been me.

I had a gout attack while on a business trip to Chicago...let me tell you it hurts like a bitch...and haven't been able to shake it yet. I've pretty much been out of commission since last week...the pain has been debilitating and has rendered me virtually brain dead...too painful to even make a post.

The original medication didn't work the way the docs expected...should have resolved the problem within three days...so I had to go back again today and wait a few hours for them to try something else. That makes two visits to my doc this week and a trip to the emergency room last week...and about a day and a half of cooling my heels in waiting rooms. I normally need that frequency of medical help over the course of four or five years. On the bright side, I've done a year's worth of magazine reading...everything from Fortune to Ladies Home Journal.

For those who may be interested, gout is now considered to be a form of arthritis. It occurs when uric acid in the blood crystalizes and settles in the joints...usually in the big toe...that's a pretty good drawing (above) of what my right toe looks like...but sometimes in the ankle, and less frequently, in the knee. It is extremely painful...I have a very high pain threshold, but have never had to endure anything like this :-(

Gout has sometimes been called 'rich man's disease' or the 'disease of kings' because doctors once thought it came from eating a very rich diet...doesn't hold true in my case since my diet is very Mediterranean and low in fats. Now, they think it can be triggered by a number of different kinds of foods as well as alcohol...hmmm, wonder if it could be the two bottles of red wine I manage to make disappear each day?

Now, excuse me while I go scream.